The significance of August 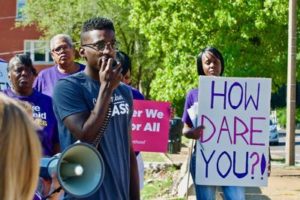 I woke up thinking about Bruce Franks, Jr. (For folks who don’t know, he was the State Rep for the 78th District and an activist.) I didn’t know him personally but I always enjoyed hearing him speak. He could be laid back or loud and, in both instances, just as effective.

One chant he would use was, “I! I! I believe that we will win!” As he chanted, the crowd would repeat each part. It would be very powerful and uplifting. The last time I heard it was August 9, 2018, while on Canfield at a remembrance ceremony for Michael Brown, Jr.

Today is August 1 and ironically August doesn’t have any actual holidays. Nevertheless, there are several significant happenings. It’s Back to School time, which is worth celebrating. We are having an Education Resource Fair August 2 at 5 p.m. Details are on A Red Circle’s home page.

August is also Black Philanthropy Month, which is set aside for people to financially support Black-led non-profit leaders doing work in Black communities. A few of our supporters are hosting events throughout the month so that people can learn about and share the work A Red Circle is doing.  A final party will take place on August 28 at EyeSeeMe, the African-American Children’s Book Store in University City.  We want to see you there!

Also, this August 9 will mark five years since Michael Brown, Jr was gunned down by an officer and left in the street for four hours. Five years since the community asserted itself and decried that it would not take his murder lying down and, that his death would not be in vain.

Five years. To some, that’s a long time. To others who have been in grief and all of its stages, it might feel like a drop in the bucket.

I remain encouraged and I pray you do to, that whatever your endeavor is to create positive change in our communities, that we will win!